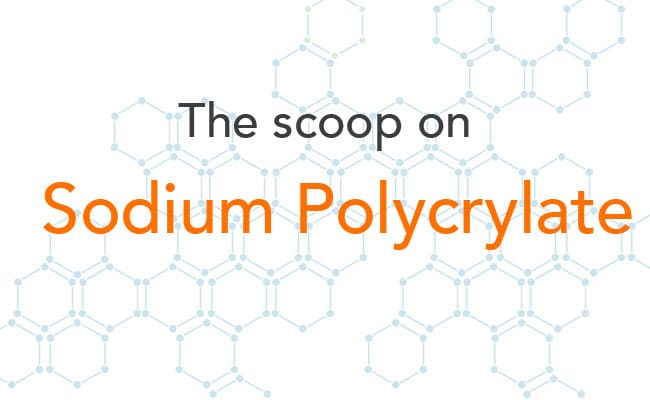 What is sodium polyacrylate?

Sodium polyacrylate is an absorbent polymer that is used as an emulsion stabilizer, a hair fixative, a film former, skin conditioner, and a viscosity agent [1]. You will see them as the gel like crystals in baby diapers, which are makes them  absorbent. In detergents it works as a chelating agent, which neutralizes the heavy metals in water & dirt so that the detergent can be more effective at cleaning. It is also used as a thickening agent because it can absorb and hold onto water molecules.

What products is sodium polyacrylate in?

How to tell if a product has sodium polyacrylate

The Environment Canada Domestic Substance List classifies sodium polyacrylate as “expected to be toxic or harmful” [1]. Small particles of sodium polyacrylate, if inhaled may irritate the airways, cause lung irritation with prolonged exposure [2].  The manufacturing process can create contaminants like acrylic acid, which is associated with skin burns, eye damage & skin corrosion [3].

How to avoid sodium polyacrylate

Read the ingredient labels to avoid sodium polyacrylate and manufacturing contaminants like acrylic acid. Be sure to avoid products that contain all synonyms for sodium polyacrylate like those listed above. Instead, use toxic chemical free detergents and alternatives like cloth diapers if at all possible.

Our Mission is to help parents create healthier homes by taking the worry & toxins out of cleaning.

Hi! While Force of Nature is an EPA-registered disinfectant federally, the registration process in your state is not yet complete. Until this is complete, we can’t claim that it is a disinfectant in your state. Click here to proceed with your purchase.